Soon after Albert Balbon turned on the spectrometer, three images come up on the big screen at the front of the lecture hall: one is what the technician running the lab sees, one is what the instructor would see, and one replicates what the student would see. With the click of a mouse, the “student” moves the spectrometer, releases some gas, and the same read-out appears on all three screens. That “student,” Balbon explains, could be anywhere in the world, running this lab equipment in collaboration with several other students all joining in at the same time. 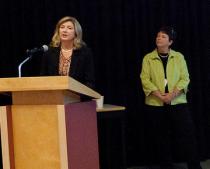 As he explains the mechanics of setting up a physics, biology or chemistry labs for use on-line, the room starts to buzz.

This two-day meeting is showcasing the work of the North American Network of Science Labs Online (NANSLO) project, which has received a $750,000 grant from the Next Generation Learning Challenge. The room (at North Island College on Vancouver Island) is full of about 40 international educators from British Columbia, Colorado, Wyoming, Montana and California. They’re here to see hands-on technology pioneered in B.C. and now being scaled for use in the western United States.

The promise of web-based science labs immediately becomes apparent to the participants. An infrastructure could be built to bring distance learning to the hard sciences: to have well-equipped labs in different educational institutions shared by all in the network, so that every institution doesn’t have to replicate the same set-up, and so that students in rural areas have access to a richer learning experience and lab equipment their local college otherwise could not afford.

The buzz in the room is excited but cautious at the same time: is this on-line lab experience as good as, or better than, a real-life lab experience? Could someone who took a college science course online transfer that course to a four-year degree? How much money could the post-secondary system save by using web-based technology? How many rural or remote students could be served by a remote web-based science lab? Yes, we have the technology, but are web-based labs pedagogically sound?

Pat Shea from WICHE, one of the principal investigators in the NANSLO project, explains to the group that a shortage of science teachers, especially in rural areas, especially for medical professionals, is a real problem in Montana, Wyoming, and other western states. That’s why online science labs are such a priority. “We want to keep people in their communities,” she says. “[As part of this project] we want to address transfer and articulation issues in moving from college to a four-year program.”

“We invited faculty here to get hands-on with the equipment early on, to imagine what’s possible with online science labs,” says Paul Stacey of BCcampus, a co-investigator in the NANSLO project. “We are hoping for some good word of mouth among educators, evaluators and credentialing bodies around these courses. This is an ambitious project with a short timeline for what we want to accomplish.”

Stacey goes on to explain that three discipline panels have been created for Physics, Chemistry and Biology, to create a “best of breed” version of courses for the NANSLO project. The lab at North Island College is being replicated in Colorado, to see how science labs online will be scaled from dozens to hundreds or even thousands of students.

Judging from the optimism in the room, science education from a distance could be coming to North American post secondary institutions sooner rather than later.