They’re not just talking “open” at Royal Roads University – they’re doing it in a very visible way. Open.royalroads.ca is a one‑stop platform featuring a collection of open resources developed by and for faculty, a software code repository, and space for other shared opportunities. 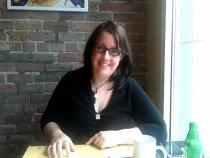 The idea originated with Emma Irwin, a senior systems analyst and web developer at Royal Roads University. But its roots go back to a project started in 2007 by Mary Burgess before she joined BCcampus.

Drawing on her Master of Educational Technology studies at UBC, Burgess advocated open practices to instructors and other stakeholders at Royal Roads, then used a grant from BCcampus to pioneer the university’s first collection of open educational resources. These early resources “put a face on the whole aspect of sharing for the university,” says Irwin.

A self-avowed “big open advocate,” Irwin took the project to another level after attending a Drupal conference last year and learning about the work of Open.Michigan. Galvanized by the extent of research, code, and resources being shared, she developed a bigger picture vision of open that ultimately led Royal Roads to create a GitHub repository for Moodle and Drupal code sharing.

By sharing code, the university is giving back to the open source community in return for adopting open software to support its operations.

Open by doing, not by talking

“The launch opened it up as a whole bucket of resources that includes OER, code, and other things from faculty,” Irwin told BCcampus. “It got people thinking about how universities can better participate in higher education and about the role of open in their practices.” About Moodle, she says: “We can make better software this way because universities are sharing their work and helping improve it.”

From tweets of recognition and support to requests for resources, reaction to the launch was immediate. Within the university, there is a sense of excitement that they are on the right track in sharing ideas and collaborating with other universities. Outside the university, Irwin sees interest building and adoption rates climbing.

Open RRU is benefiting not only code developers in the open source community, but higher education in general. Licensing is an important piece of the puzzle. All materials are shared with a Creative Commons license, which means educators can tweak them and ensure they are contextually relevant.

Above all, open resources benefit “the person we’re all working for, the learner,” says Irwin. This includes not only current students, but also prospective students and autonomous learners around the world.

As the university progresses along an open learning curve, Irwin sees continuous growth in code sharing, a catalogue of OER, and in the long-term, institutions helping each other to become more efficient.

“The launch of Open RRU was really amazing. There was immediate feedback, for example, on Twitter, that Open Royal Roads was open by doing, not by talking about it, and that more universities should be open and collaborating. It was great confirmation about what we’re doing.” – Emma Irwin, Senior Systems Analyst and Web Developer at Royal Roads University