What’s the first thing you’d do after four days of non-stop writing, cranking out 48,420 words while locked in a room with a bunch of geography profs? For the folks who were part of BCcampus’ first ever Book Sprint, the answer was “sleep.” 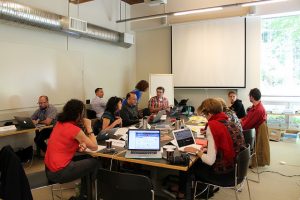 The book sprint model gave the team its focus.

The sprint brought together a team of five geographers/authors from B.C., a librarian, BCcampus staff, and trained facilitators to write a first year geography open textbook in just four days. From June 9 -12 they hunkered down at University of British Columbia to write British Columbia in a Global Context.

The event was facilitated by German firm BookSprint, and organized by BCcampus.

Collaboration made it happen.

First, the team brainstormed the structure and content of the book. After that came 14-hour days of collaborative writing, researching, editing and reviewing.

It was hard to find appropriate OERs.

It all worked out in the end, but finding the right open resources was difficult.

“We were surprised at how many provincial government resources weren’t actually usable because of their copyright license,” says event organizer and BCcampus Manager of Open Education Clint Lalonde. “We’d find great charts and graphics on a government website that were completely copyrighted.”

In some cases, the team had to go to the source of the data and recreate the material.

Four days, many challenges, and eight chapters later the open textbook is now complete, and BCcampus is already considering how it could reuse the book sprint model.

The textbook will be edited this summer and published in the fall. It will be available electronically as a website, EPUB, MOBI, PDF, and WordPress file. The text will also be available in hard copy through print-on-demand. Update, the textbook is now available in our open textbook collection.

After publication, the open textbook will be distributed to geography profs across B.C. for peer review.

Here’s BCcampus’ advice on how to have a productive book sprint:

“We were surprised at how many provincial government resources weren’t actually usable because of their copyright license. We’d find great charts and graphics on a government website that were completely copyrighted.” – Clint Lalonde, Manager of Open Education, BCcampus

“One of the most powerful lessons for me was that I should not simply be focusing on using open textbooks in my courses; I should be encouraging students to build open textbooks as course activities. By doing this, we teach not only discipline specific content, but also increase students’ ability to engage in the democratization of knowledge.” – Gill Green, Geography Professor, Okanagan College

“As academics we get funneled into one specific domain. Writing this intro level textbook allowed me to get outside my area and see what other scholars were doing.” – Britta Ricker, Digital Geographer, Simon Fraser University

“It left me with a fascinating understanding of the breadth of geography.” – Amanda Coolidge, Manager of Open Education, BCcampus