When we think about gravitational or g-forces, astronauts and fighter pilots usually come to mind. However, g-forces also play an important role in teaching taxi drivers, police officers and others how to maneuver a vehicle smoothly and safely at the Justice Institute of BC (JIBC).

The JIBC is quickly becoming known as an innovator in education with the introduction of several mobile learning initiatives and other technologies directed at improving the learning process. It’s also recognized for its willingness to explore and embrace technologies that enhance public safety. Most recently, a pilot project launched by the JIBC’s Pacific Traffic Education Centre (PTEC) incorporates the use of tablet technology into industry, corporate, and emergency service driver training programs to boost efficiencies in data collection, offer improved analysis for instructors, provide students with feedback in real-time, and reduce the number of collisions and injuries caused by driver error.

As part of the Technology Enhanced Driver Training Study, iPad minis have been installed on the dashboards of a student taxi and emergency services training vehicle to measure the various g-forces that occur when a vehicle turns, brakes or accelerates. If the project is fully implemented, the iPads will replace now obsolete equipment previously used to measure g-forces in the student vehicles.

“The iPads and apps being tested are an amalgamation of common vehicle technologies, such as GPS navigation and automated driver assistance systems, which have been married with a g-force measurement mechanism,” says Harry Randawa, PTEC Coordinator/Instructor. “Hopefully, this creates a readily available, simple and intuitive instant feedback and analysis tool for students and instructors.”

Three inexpensive, specialized driving apps have been identified for use in the project:

PTEC opted to test the iPad mini for two reasons. It’s small, which reduces the possibility of distracted driving. It’s also a familiar technology for many students and instructors. For safety, the iPads face away from student drivers- drivers receive audio cues, while other student vehicle occupants and the accompanying instructor can refer to the iPad screen for visual feedback on the overall control of the vehicle. This is especially helpful in assisting industry learners to provide a smooth and comfortable ride, while teaching emergency services personnel about the limits to which a vehicle can be pushed, particularly during high-speed pursuits.

“There are so many potential applications for this technology including weaving it into our distance and online education programs,” says Randawa. “The possibilities are endless and only limited by our imaginations and, of course, our budget.”

So far, feedback has been overwhelmingly positive with users reporting a feeling of comfort and connectivity with the iPads. The pilot officially wraps at the end of May. 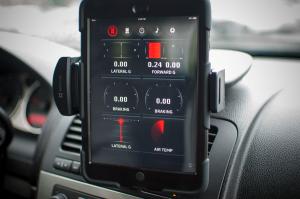 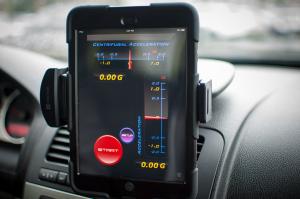 iPad minis measure g-forces in JIBC student vehicles.
Photos by Dennis Yip. More photos, as well as a demonstration video, can be found on his SmugMug page.