In the Fall of 2015, Clint Lalonde started a new role with BCcampus, as the Manager, Educational Technologies and as such, he’s bringing creative ideas to life and scanning the horizon for new EdTech projects for us to try, test and implement.

One of the projects I’ve been thinking about (and writing about) is the work with Sandstorm and the BC OpenEd Tech group, and trying to align the work of that group (and specifically with Sandstorm) with a broader vision for my role at both BCcampus and within the system.

What is emerging is a vision that sees me facilitating getting new educational technology into the hands of many people to try, and help with the evaluation of that technology to see where/if it aligns with teaching and learning.  Which is why I am liking Sandstorm because it looks like one way to get new tools into the hands of educators to try.

Another tool that I’ve been looking into is an IMS Global tool called the Community App Sharing Architecture (CASA). CASA is conceptually similar to Sandstorm in that they both share the same end goal of making it easy to deploy applications. But it does differ from Sandstorm in a few ways.

First, it is designed to work primarily with an LMS and is focused on deploying LTI enabled apps within an LMS, as opposed to Sandstorm which focuses on stand-alone outside of the LMS applications. The idea is that you can have an app-like “store” within the LMS that can be deployed by the users that integrates with the LMS.

But it isn’t limited to the LMS. A CASA app store can be mobile focused as well, as this UCLA example is with a mix of apps and dashboards optimized for mobile devices. And there was also talk in a webinar I watched about sharing analytics (perhaps connected using Caliper), but that seems to be at a pretty conceptual level right now.

The CASA architecture is also interesting in that it enables the connecting of different institutional app stores to each other in a network of trust. Metadata about the apps can be shared between institutions. And this is interesting because what CASA can do is enable the sharing of reviews about the apps between trusted nodes of the network. 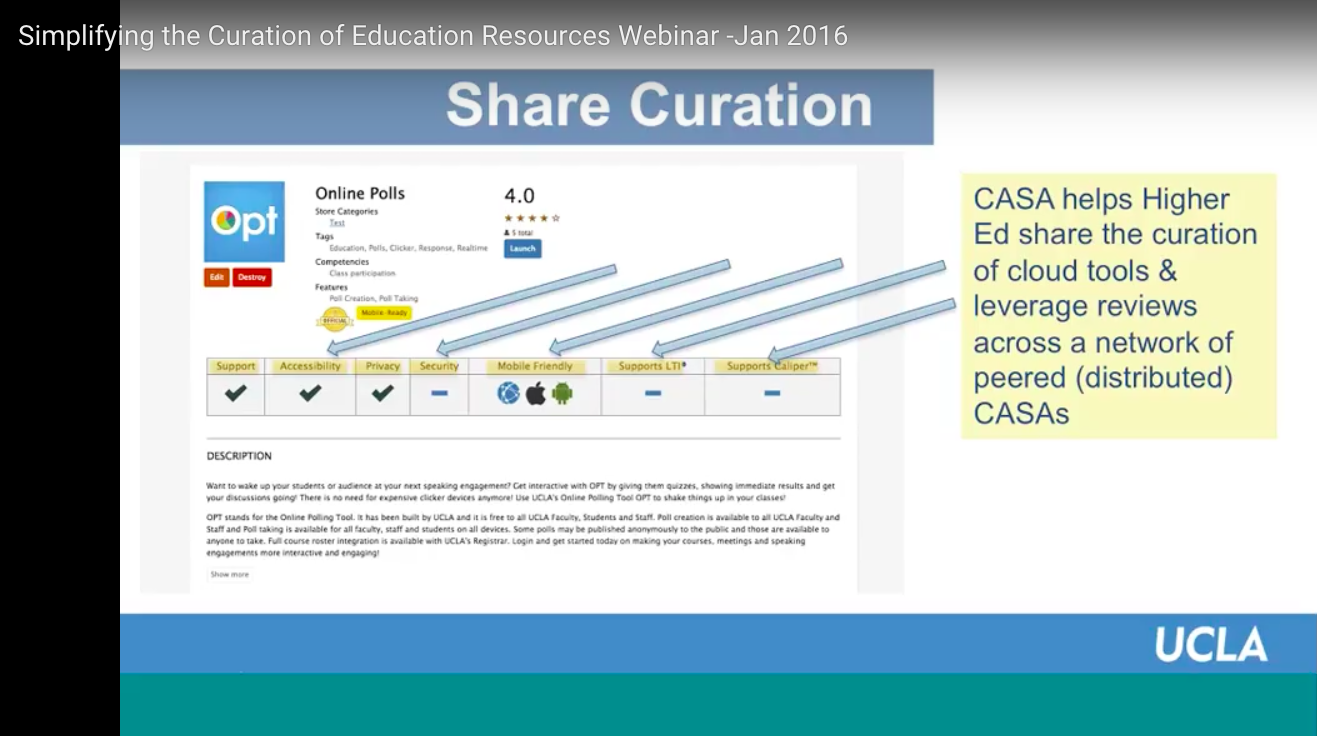 This is an example of what a future CASA app review will look like. Faculty reviews of an app from one CASA enabled institution can flow through the network and be available to other members of the trusted network. This helps to aid in discoverability of new applications and can help instructors separate the wheat from the chaff. As the number of edu applications continue to explode (the EduAppCenter currently has over 220 LTI enabled apps in its store), both discoverability and peer reviews from trusted networks are important to help filter, as anyone who has developed a PLN can attest to. CASA has the potential to enable another technology filter by leveraging the reputations in a network of trust.

Right now, CASA is still a beta tool. But it does look like an interesting technology that could make the deployment of edu focused applications easier for end users while giving them some guideposts as to how useful these tools might be.

Join us at an upcoming event: