Most people don’t create OER for the awards, but hardworking instructors like this one deserve acknowledgement. Please join us in congratulating Terry Berg on being the 16th recipient of the BCcampus Award for Excellence in Open Education. 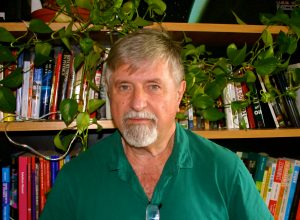 For his unwavering commitment to widening equitable access to education, his adaptations of multiple open textbooks and other OER production in developmental algebra and physics, and for his selfless dedication to serving our most marginalized students, we present Kwantlen Polytechnic’s fine instructor, Terry Berg, with the BCcampus Award for Excellence in Open Education.

Terry Berg is a beloved champion of OER. Quiet and extremely hardworking by nature, Terry holds a deep commitment to serving students at KPU and beyond. A long-time instructor in Academic and Career Preparation at KPU (a program that serves our most marginalized students), he has on his own time worked to heavily adapt open textbooks for developmental algebra and developmental physics. Each of these projects (which are both nearing completion) have been massive undertakings that he has poured his heart and soul into, with a clear goal of enhancing the quality and relevance of these resources. In addition to revising the textbooks themselves, Terry has also painstakingly created practice problems with accompanying solutions for both texts.

He is known amongst students for involving them in the fine tuning of the books, with the idea that he has created them, but students have perfected them. Terry has done none of this for recognition or personal reward. In fact, he was doing this work quietly long before KPU became so committed to open education. Indeed, he is nearing retirement and has repeatedly expressed a strong desire to make the lives of future students easier, to serve his colleagues and broader discipline, and to contribute back the knowledge he has gleaned over his decades of post-secondary instruction. He even plans to apply to spend his final term of educational leave (an opportunity earned after years of hard work) completing more work on OER.

“In an institution that is blessed with many open education champions, Terry stands out for me because of the strength of his conviction, his incredible productivity, and his humility. If I could, I wouldn’t just nominate him for an award—I’d name the award after him!”—Rajiv Jhangiani, Kwantlen Polytechnic University